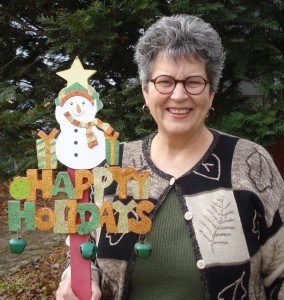 2013 was a wild ride for me filled with everything good and I’m looking forward to this year in wondrous anticipation.

Here’s the Weavin’ Wicker Woman Blog 2013 Year in Review post and also adding some snippets of things that took place that I didn’t get a chance to actually post about in a timely manner.

Thank you SO much for being a loyal subscriber and sharing this journey with me. I truly appreciate you!

The first six or seven months of 2013, my family members and I were tying up loose ends after my husband’s passing in December 2012. We worked around the place cleaning up the grounds getting rid of junk, siding the building in anticipation of putting the place on the market.

We were also dividing up hubby’s belongings and either selling stuff that the kids couldn’t use or passing them on to the Salvation Army, Goodwill and donating the construction stuff to Habitat for Humanity. 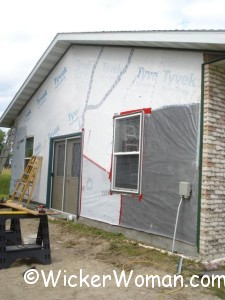 Our son did the green metal barn siding, didn’t he do a great job? And the contrast of the light colored brick is really accentuated by the green garage doors and the green siding, don’t you think?

And my son-in-law built a small deck out the back door so I could sit out there and watch the hummingbirds and other wildlife, while sipping on my cup of coffee each morning, and watching the sunsets in the evenings.

JULY saw me teaching the first class for the year, held in Franklin, Indiana at the famous Marc Adams School of Woodworking. There were fourteen students in the two chair caning classes; hole-to-hole footstool and the cane twill footstool.

Then after the Marc Adams School of Woodworking cane class, I stopped in Ohio on my way East to New York and Canada, to visit my good friend, fellow chair caner and founding member of The SeatWeavers’ Guild, Inc.®, Jan Noall.

I spent the night and we also had over five members in total of the original 19 founding members of TSWG at lunch! What fun that was, and Jan also showed me all the caning projects she had done and some in process. She’s a fantastic chair caner and genuinely a nice and generous soul.

Next, it was on to Niagara Falls, New York where I stayed overnight and went on the boardwalk, Queen of the Mist boat ride into the Falls, watched the Falls light show at night and even took a helicopter ride over the Falls! What a rush and a once in a lifetime experience!

I’m so glad that I sprung for the $100 for the helicopter ride, when would I ever get a chance to fly over Niagara Falls again? Sure, over a cornfield sometime, but NOT Niagara Falls for cripes sake!

After my stint at Niagara Falls, I drove on to Wainfleet, Ontario, Canada to be a student in a week-long willow basket weaving class with Danish instructor, Anna Metta Hjornholm at Lakeshore Willows.

AUGUST 2, 3 & 4, 2013 was the 6th Annual Gathering of The SeatWeavers’ Guild, Inc.® held in Sautee Nacoochee, Georgia, but it was following right on the heels of my two week long journey, so had to beg off for this year.

This was the first Gathering that I’ve missed since our original founding of TSWG in 2007, but I won’t miss 2014 held in Old Sturbridge Village, Sturbridge, MA July 25-27!

SEPTEMBER was my trip to Door County with friends during the first part of the month. We had a great time, visiting art galleries and making contacts for selling my antler baskets, taking in the tourist sites and just plain relaxing, getting some much needed R & R.

The end of September I traveled back to Wisconsin to teach antler basketry and chair caning at the Fall Workshop of the Wolf River Basketry Guild in Shawano, WI. Had a good time there too, seeing old friends again and meeting lots of new ones, too.

OCTOBER — I participated as a student in the 7th Biannual National Basketry Organization (NBO) in Gatlinburg, Tennessee and had a blast! The last time I had been at Arrowmont School of Arts & Crafts was the year we founded the NBO in 1999! I was one of the founding members, so it was like old home week, going back there again.

(I ran back to my room to get my basket and in that time, the group picture was taken. So they were going to PhotoShop me into the picture over there on the right.)

I learned so much, got to meet old basketry friends, meet new ones, take in the classes, workshops, demonstrations and the exhibit and work with new and exciting weaving materials.

NOVEMBER — The end of the year took me up to Grand Marais, MN to teach two classes at the North House Folk School, two weekends, back to back.

First one was the three-day antler basket weekend emersion. We had six students, some of which had never woven baskets before, let alone an antler basket. But as you can see, all of them turned out great and everyone was very proud of their accomplishments.

The very last class of the year 2013 was again held in Grand Marais, MN at the North House Folk School only this time it was a three day BYO (bring-your-own) hole-to-hole chair caning class with eight students.

Some of the chairs brought were quite challenging, but everyone managed to if not complete their chairs, at least got far enough along to confidently finish at home.

Well, that pretty does it for the whorl-wind wrap-up and review for 2013. Sorry this was such a long post, but I wanted to make sure I posted the pictures along with the events since I missed getting them up when they occurred.

Hopefully, with the slower pace for 2014, I will be able to blog more frequently and post all the pictures right away.

I am so blessed to have good health, supportive family and friends and all you fantastic blog subscribers! Thank you all for blessing my life and enriching it to the fullest!