I began my chair caning, wicker furniture repair and antler basket weaving career in 1975 with an infant son in tow.

My mother-in-law had both encouraged me and insisted that I learn how to weave a paper rush seat. She had done some chair caning in the past but didn’t want to teach herself how to do rush seat weaving.

So she bribed me by saying I could have a beautiful walnut drop-leaf dining room table in return for weaving the seat of an old mule-ear chair she had. Shortly, she brought over an instructional magazine article, the paper rush weaving materials, the chair frame and wished me luck! If you’d like to see pictures of that first rush seat just click on the hotlink here, Cathryn’s first paper rush chair seat.

Eventually, I started a home-based business weaving on a part-time basis so I could care for my young child and still make some pocket money that I could call my own.

My mother-in-law was right, I loved the antique chairs that I worked on and thanks to her have enjoyed years in the field of arts and crafts, with a special emphasis on wicker repair and chair seat weaving.

And then much later on in 2009, on the 10th anniversary of being in business, The Wicker Woman® received its registered trademark status! 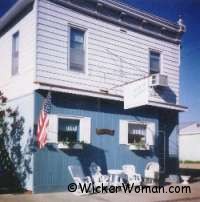 In 1991, I leased my studio in Zumbro Falls, Minnesota and became a full-time, professional weaver with my own retail storefront.

And in November of 1999, I purchased the domain WickerWoman.com, where I set up my very own wicker repair, chair caning and basketry information and resource domain website with no e-commerce.

Over the years, I’ve added some e-commerce to the site with the addition of the National Furniture Repair Directory™ the Cane & Basket Supplies Directory™, and sales of my antler basketry art and antler basket patterns.

What started with only a four-page information and resource website, has now morphed into a site with nearly 1,000 Google indexed pages and thousands of individual blog posts as of 2016.

In the late 1990s, I had the great pleasure of creating two wicker/cane replica airplane seats for the Johnson’s Wax Company’s Sikorsky S-38 Amphibian airplane.

The owner of the company and pilot himself, Samuel C. Johnson, commissioned Born Again Restorations in Owatonna, Minnesota to build a replica Sikorsky S-38 of the one his father flew to Brazil in the 1930s. It was in Brazil that they discovered and developed the carnauba wax for use in their products.

After three years in the making, Sam and his two sons flew the Sikorsky S-38 amphibian replica on a recreation flight of the route taken so many years ago by his father, logging in over 15,000 miles on the round-trip flight.

Here’s a very interesting article about the entire project. The Spirit of Carnauba

This one was a replica and reconstruction of the original “Osa’s Ark”, used by the filmmakers and authors Martin and Osa Johnson (no relation to Samuel C. Johnson), back in the 1930s, filming their African journeys.

The replica made for Buzz Kaplan was made using an original S-38 wing and tail booms. Buzz and his wife made several trips of their own to Africa in the plane that was painted in black and white zebra strips!

Osa’s Ark Sikorsky S-38 replica was also used in the 2004 movie, “The Aviator,” starring Leonardo DiCaprio as Howard Hughes and later in 2012 in the “Wandering Star.” Here’s the trailer of the “Wandering Star,” and if you look closely at the first interior shots you can see the two cane/wicker chair seats I made.

2000 brought a new aspect to the shop through the Folk Art Apprenticeship Grant awarded by the Minnesota State Arts Board and the McKnight Foundation.

I was honored to serve as Master to Apprentice Ben Scott from Byron, MN teaching him all the various types and patterns involved in chair seat weaving; hole-to-hole cane, cane webbing, wide binding cane, paper rush, natural rush and splints.

Over a period of several weeks, Ben came to the shop for one-on-one chair caning and business marketing techniques and tips of the trade. He later applied his learned skills to his own chair caning business, opened after he retired from his position as an Episcopal priest.

Ben quickly became an accomplished weaver, providing his services to customers from Byron, Rochester, Minneapolis, St. Paul, MN and surrounding areas. Paul and Sarah Edwards highlighted both myself and Ben Scott in their book ”

I was awarded two Arrowhead Regional Arts Council/McKnight grants; Career Development Grant 2004 for an antler basket exhibition at the MacRostie Art Center in Grand Rapids, MN and a Career Development–Emerging Artist Fellowship, 2005 for travel/study to England.

In July of 2007, I had the distinct pleasure of being the President of the very first chair caning guild in the nation called, The SeatWeavers’ Guild.

We have a website and held our first annual gathering and workshop in July of 2008 in the founding state of Ohio at Robbins Crossing on the grounds of the Hocking College in Nelsonville. In 2017 we held our 10-year anniversary Gathering, coming full-circle and holding it in Nelsonville, Ohio again after traveling to several other states in the interim.

I am a proud founding member and served two terms (2007-2011) as the first President of The SeatWeavers’ Guild, Inc.®

Supporting Guilds and Organizations through Membership

Basically self-taught and after getting the chair seat weaving and wicker repair down pat, basketry began to intrigue me too.

So in the early 1980s I made traditional reed baskets, wicker baby cradles and bassinets and started entering in arts and craft shows around the region. 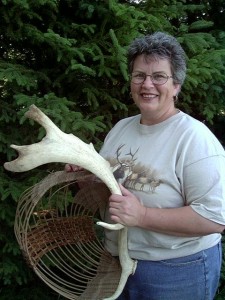 One day, in 1988 I saw a picture of a deer antler basket in a magazine and decided that I could improve on that design, so I went home and began creating my own original designs.

The antler basket quickly became my signature basket and is what I’m best known for in the basketry world today. I’ve enjoyed creating the antler basket sculptures for nearly 30 years now.

I really enjoy meeting all the people, traveling and being able to pass on my knowledge; perpetuating all these fine crafts!

See the Events Calendar for a schedule of interesting basketry workshops, gallery exhibitions, flea markets and shows this year taking place across the country.

With over 25 developed antler basket patterns, and several traditional and seatweaving patterns, there’s always a variety to choose from at a workshop, convention or basket guild class.

Patterns are available wherever I teach, here on WickerWoman.com, and from several cane & basket supply companies.

Three of Cathryn’s deer antler baskets were featured in a 1999 reprint of Splint Woven Basketry by Robin Taylor Daugherty and can be found in other books and publications.

These fine authors either featured my work or requested my craft and marketing expertise in the following books:

In 2002 we sold our building in Zumbro Falls, MN and closed the business there to relocate in northeastern Minnesota on 120 acres.

Although I’ve limited the number of chair caning and wicker repair jobs I commit to, I’ve been teaching several classes both in the state and across the country, exhibiting in regional and national galleries.

We built a huge studio/garage on our property where I do the wicker repair, chair caning repair and create my antler basketry. I have offered some weaving classes and private instruction here, too, but prefer to teach at other venues.

Although I retired from the day-to-day activity of chair caning and wicker restoration in 2013, I continue to teach my crafts, develop and market the antler basket patterns and my deer antler baskets to sell here on my website.

Happy Weaving to you all!