This email basketry digest was originally started in 1997 by 26-year old David Collins from Indianapolis, Indiana with only 71 subscribers. It later swelled to well over 1,000 subscribers, connecting to each other from the United States as well as from several countries overseas.

Weaver’s Words email digest was the one online lifeline that basketmakers had at the time, we were all proud members of a very close-knit community of basket weavers. 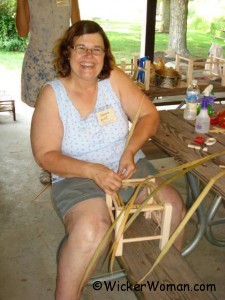 When David passed away in 2005, Bonnie Easterbrook Krist asked David’s mother Norma, if she could please continue with this vital basketry digest. At the time, David’s Weaver’s Words was just about the only way that basketmakers could connect with each other.

Every week we would watch our email boxes with anticipation of its arrival. This of course. was years before the social networks of Facebook, Twitter, MySpace and LinkedIn were even thought of!

Then post a message or submit their questions about basket weaving, or make posts about the workshops they’ve attended, or give website links they think others will be interested in.

Then the moderator, Bonnie Krist, reviews the posts, accumulates them into an email message and sends out to all the subscribers or members, on a weekly basis. Sometimes personal commitments and schedules interfere with the delivery, but most of the time, Weaver’s Words is sent on a regular weekly basis.

Here’s an online copy of one of the very early basketry digests that you might find very interesting reading: http://www.angelfire.com/art/weaverswords/WeaversWordsV1I1.txt

Bonnie has done a wonderful job with the basket digest list and is to be commended! She’s a basketmaker and chair caner herself and is also a founding member and membership chairperson of The SeatWeavers’ Guild, Inc., all of which keeps this lady pretty busy!