Here’s a great Throwback Thursday photo that I just ran across. It was taken at the founder’s meeting of the National Basketry Organization in 1999 at Arrowmont School of Arts & Crafts in Gatlinburg, TN, before we even had an official name! 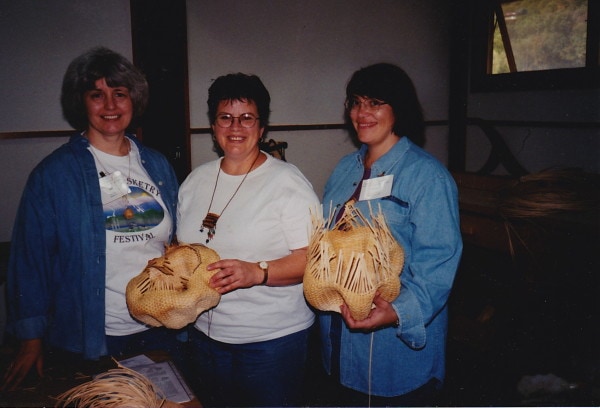 Recognize those three smiling faces? That’s founding members, Suzi Nuss, Cathryn Peters, and JoAnn Kelly Catsos in the picture, taken during a “squashy” basket class from instructor Judy Olney as part of the daily activities during the weekend meeting.

Back then, we didn’t have the Internet in its present form. Instead we relied on craft magazines such as The Crafts Report, American Craft, Shuttle Spindle & Dyepot, Basketmaker Magazine, Basketry Express, Basket Bits and the hard copy newsletters from the basket guilds to stay current with the fiber art and basketry field’s events.

There weren’t very many craft, fiber, or basketry sites on the Internet yet, either. I had just started my chair caning and basketry information and resource site, WickerWoman.com, so I did as much publicity  as I could and also wrote up the event in several basket guild newsletters that I was a member of.

So, by all of us working together and through the efforts of Michael Davis and a few other dedicated basketmakers and the support of the Handweaver’s Guild of America (HGA) and their staff, we held our founder’s meeting.

There we were, maybe 75-100 basketmakers from all over the country, converging on the craft school to form a national basketmaker’s guild. The first one of its type in the country!

I remember Shaker basketmaker, John McGuire, one of the “ringleaders,” going around soliciting $10 memberships with the promise that this organization would one day become a leader in the craft and basketmaking industry!

Traveling from Zumbro Falls, MN to Gatlinburg, TN over a decade ago, was a big undertaking for me, both financially and logistically. As memory serves, it’s over 1,000 miles from MN to TN, but the airplane made it seem far closer. Glad I didn’t drive, because my mid-1990s Dodge van probably wouldn’t have made the journey there and back again!

Thank goodness, hubby and I had just become “empty nesters” with both kids out of the house, but we still had a dog to care for. Money was tight, but yet I had to take off a week from production at my wicker repair studio, (which meant no money coming in) and had to pay for the airplane ticket, lodging, food, class materials and any touristy things I wanted to do. Luckily hubby cared for the dog while I was gone and also helped out funding my trip.

The whole experience was something I’ve cherished all these 16 years and am so proud to say I was a small part of making it happen. Got to rub elbows with all the big name basketmakers of the day, ones that I had just read about until that weekend and learned so much about basketweaving!

At that time, there were no basket guilds near me, no basketmakers I could get together with and have coffee with either. My only exposure to others in the field were those few basketmakers exhibiting alongside me at juried art fairs and shows.

Oh, I take that back, I was also a member of the Minnesota Craft Council (now defunct), up in Minneapolis, which was 75 miles away. And the Headwaters Basketmakers Guild in Bemidji, MN which started in 1990.

But I rarely if ever, made it to the guild’s monthly meetings, because of the long distance from Zumbro Falls. I did however, participate in all the MCC shows and juried exhibitions that I could.

This antler basket below made the publicity postcard for the MCC’s annual outdoor show at St. Catherine’s College in Minneapolis, MN 1991, “Wave Deerly.”

Coming Full Circle with the NBO

In 2013 I was able to attend the bi-annual conference of the NBO, held once again at Arrowmont School of Arts & Crafts in Gatlinburg, TN.

In all those years, this was only the second time I was able to attend a conference. But thought it was important that I attend this one in particular, since it was being held where we originally founded the group.

I took a cedar bark class from the astounding and very accomplished, Dawn Walden,  cedar basketmaker from Michigan. I love her teaching style, and weaving with all those different natural materials was an education in itself. Thank you Dawn.

This year the NBO is holding their 8th Annual Tradition and Innovation in Basketry VIII Conference  at Macalester College in St. Paul, Minnesota on July 14-19th and I’m definitely driving down the 300 miles or so for that!

Get all the details from their site and be sure to attend, especially those of you that live in Minnesota, for this once in a lifetime get-together with others in the field of basketmaking.

Doesn’t matter if you are a newbie or professional basketmaker, using contemporary materials or traditional natural materials, there’s something for everyone. All are welcome with no exclusions!

Be sure to catch the All Things Considered VIII juried exhibition at The Grand Hand in St. Paul, July 9-August 22, 2015. And also the first non-juried exhibition of NBO basketmakers that runs throughout the conference.

Long live the National Basketry Organization! The national community of basketmakers weaving together for a better world!