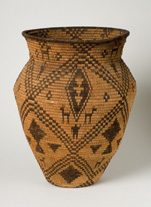 If you happen to be in the Greenwich, CT area before June 10th, stop in The Bruce Museum at One Museum Drive to catch the exhibit: Weaving a Collection: Native American Baskets from the Bruce Museum.

It explores five geographic regions of basketry: the Northeast, Great Plains, Southwest, California, and Northwest. On view are approximately 45 examples from all the major basket makers of North America that illustrate the distinctive elements of technique and materials from these regions.

The show focuses on the differences in forms and materials among tribal affiliations and geographical regions and examines the evolution of basketry following the arrival of the collector. It concludes June 10th, so hurry in while this wonderful example of early basketweaving is still on view!