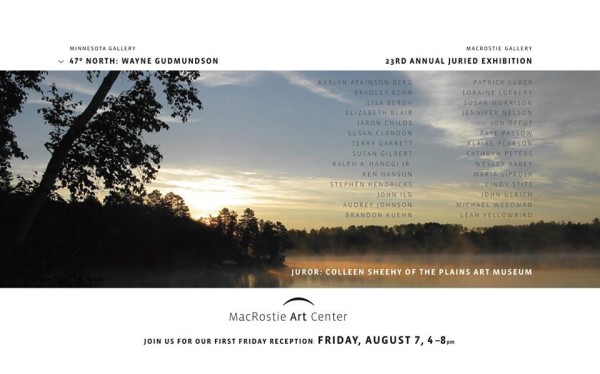 Sheehy is the Director and CEO of the Plains Art Museum in Fargo, ND, and holds a doctorate in American Studies. Under her leadership, the Plains Art Museum completed a major capital campaign, installed a newly commissioned mural by famed pop artist James Rosenquist, and opened the Katherine Kilbourne Burgum Center for Creativity in 2012. 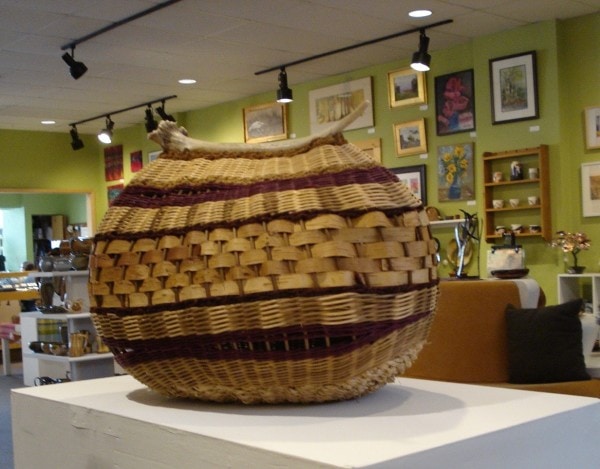 I was pleased to have my antler basket sculpture, “Antler Intrigue” selected for this prestigious show. And even more pleased and honored to have won the 1st place 3-D $500 monetary award!

My heartfelt thanks go out to juror Colleen Sheehy, The MacRostie Art Center and sponsor of this exhibition, Timberlake Lodge Hotel in Grand Rapids, MN.

I also had several pieces in the Non-Timber Forest Products Show (NTFP) that was taking place in Grand Rapids, MN at the Old Central School, August 1-7th during the Tall Timber Days celebration. I was also going to demonstrate basketweaving, but was out of town at The SeatWeaver’s Guild, Inc. 8th Annual Gathering in Nashville, IN.

Non-Timber Forest Products (NTFPs) include things like maple syrup, balsam boughs, mushrooms, and birch bark which come from the forest and have a variety of artistic, culinary, and commercial uses. The Itasca County area has a history steeped in the forest industry, but as the economy diversifies the percentage of people involved directly or indirectly in forest and natural resource sector grows smaller. Conscientious management and stewardship of these resources continues to be vitally important.

The Woodland Committee’s goal is to engage the public’s imagination, curiosity, and interest in the world of forestry through the arts. Working with local artisans, they will produce a temporary exhibit of artwork that utilizes NTFPs to showcase the talents of Itasca area artists, highlight non-timber uses of our natural forest resources, and excite the public’s interest and imagination around traditional and fine crafts.

Additional artists will had work on display in the exhibit including antler baskets and other woven pieces by Angora artist Cathryn Peters and students from a birch bark weaving class at MacRostie Art Center with master craftsman Vladimir Yarish.