“Blessed is he who has learned to laugh at himself, for he shall never cease to be entertained”
… John Powell

I spotted this quote on Elizabeth Summers Numerology News one morning and just had to share this with ya’ll. 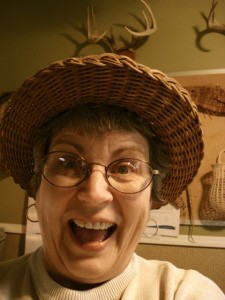 Can you laugh at yourself? Well, I sure can and that was one of the qualities that my late husband “Pete” said that he loved so much about me.

Thank goodness he could laugh at himself too, although not quite as readily as I could, because there was always a lot to laugh about in our household.

Just last week did something with my favorite tiny LED flashlight that was really pretty silly. Once I realized what I had done, I sat down and had a good belly laugh!

Really? How could I have done that? I guess we all can’t be perfect now, can we?

Like most people, I have several small LED flashlights around the house and in my studio in case of emergencies, but the one I use most often had just quit. So I was going to replace the batteries, hoping that was the reason it was no longer working.

I dug out my stash of AA batteries from the cupboard in the studio and proceeded to replace the worn out batteries. See the little clear plastic Gerber baby food tub I store them in? Clever, huh? I store tons of little tiny things in those food tubs. 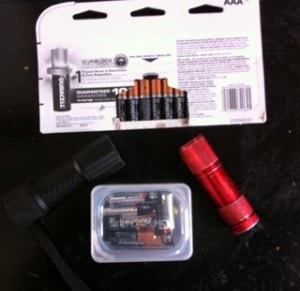 I knew they had been in the cupboard for a very long time, so went to the hardware store and purchased some more–like a pack of 10 or so and went home to try once more to get that little puppy to work.

I had never worked with these little LED flashlights before and was curious about the way they went together, but was SURE that I would be able to handle such an easy fix as replacing batteries in a flashlight. I mean really, how difficult is that?

Well, I spoke too soon, because do you see the little arrow on the side of the battery case? And do you also see that one of the three batteries in the case has the positive pole at the bottom of the case? Bet you can see where this line of questions is heading, can’t you?

Yes, it’s TRUE, during the first go around with the old batteries, I missed the part where one battery positive pole was supposed to be at the bottom of the case instead of at the top like the other two.

So that meant that maybe, just maybe all those old batteries might not have been dead after all. So I retried them and sure enough, they were all good!

There was just one, slight bump in the road though. A couple times when trying all the old batteries, I installed the battery case upside down! So of course, those batteries didn’t work either! Yikes, glad I finally figured that one out, geez…

TA-DA, let there be light at The Wicker Woman studio! Here’s another blog post goofy thing I did several years ago that you might also enjoy. Weaving Studio Saga Continues…

Can you recall any silly mistakes like this that you’ve done and are willing to admit to and talk about? If so, please post them in the comments, love to hear about YOU, too. Want to join the Silly Me Club?