Aren’t these just the cutest pictures of babies posing on the fancy Victorian wicker photography studio furniture? All of these wicker posing chairs have elaborate scrolls, curlicues, bird cage legs and Star of David cane backs. 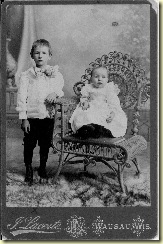 This little brother and sister are darling, aren’t they? The baby is sitting on a wood box to elevate her. Photography studio name was J. Lacerte in Wausau, Wis. 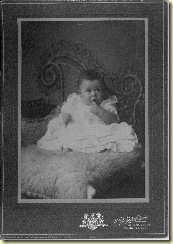 This little cutie has his/her fingers in the mouth and sitting on a sheepskin blanket.
The photography studio name was D.R. Pridham in Victoria Studio, Amherst, N.S.

And it’s really unusual to have a picture of a laughing baby as in the photo above. Photography studio was Hissing & Son in La Grange, Indiana

Cabinet cards were first introduced in 1863 by Windsor & Bridge in London and are similar to the earlier and smaller carte-de-visite (CDV) that was first seen in 1850.

These cabinet cards from the 1880s-1890s were black & white photographs mounted on hard card stock, with enough room around the outside to post the photographer’s studio name and address, usually in fancy cursive script.

The reason they were called “cabinet cards” is because they were large enough to be set on furniture or cabinets in the parlor where everyone could see them from across the room.

Cabinet cards were also placed in large, specially made photo albums, which became one of the best ways to keep the family photos, and were as important in some families as the family Bible. If you’re lucky enough to run across one in an antique store or flea market, you will have quite a record of American history in your hands.