First Snow of the Season

THURSDAY THOUGHTS–When we woke up this morning at around 6 a.m. it was snowing ever so slightly. But by 8 or 9 a.m. we had about three inches of snow on the ground and the flakes were coming down fast and furiously. 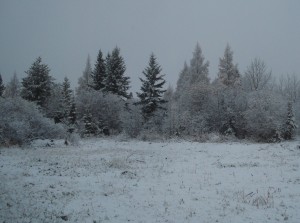 As you can see by the picture above, it was quite overcast and gloomy with a temperature of only 31 degrees. The sun looks like it’s going to come out pretty soon, and I hope that’s the case. 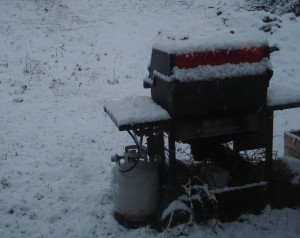 I’m driving up to North House Folk School in Grand Marais, Minnesota today which is 150 miles away, to teach an antler basket class over the weekend. Don’t want to run in to problems, hope the driving goes smoothly and I make it there in one piece.

I was trying to remember when we had our first snow fall last year, and wanted to look it up in my annual journal, but must have packed it away already. And made no mention of it in last year’s blog posts either in October or November, although there is this one that talks about our coldest temperature so far of -22 degrees in December 2010 that you might enjoy reading. https://www.wickerwoman.com/mn-sub-zero-weather.html

Enjoy the coming winter and have a great weekend! What are you doing over the weekend and how’s your weather?