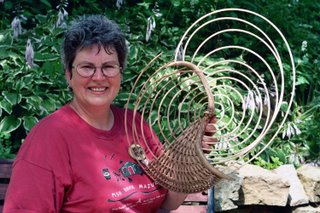 Angora, MN — Cathryn Peters, antler basketmaker and owner of The Wicker Woman business in Angora, a northern Minnesota Iron Range area, will be one of three features on an upcoming segment of the ever-popular Duluth, Minnesota Public TV program, “Venture North.” The segment on Cathryn’s artistry of creating antler baskets comes just as the Minnesota deer hunting season is ending and will air on WDSE Channel 8 on Thursday, November 30th at 8 pm.

During the program, Cathryn speaks of her passion for designing, weaving and teaching her unique deer, elk and moose antler basket sculptures. Then invites reporter and novice basketmaker, Judy Hadel, to take a stab at basketweaving herself. With some pointers and guidance Judy does very well and says she’d like to weave more antler baskets sometime!

Many of the weaving materials that go into weaving Cathryn’s antler baskets are gathered from her rural Iron Range area property; such as willow, red dogwood, sweetgrass, birch bark and cattail leaves. Diamond willow shoots as well as regular willow rods and red osier dogwood are selected from the low-lying wet areas of their homestead. Cattail leaves are gathered from the marshy areas and road ditches, and sweetgrass is gathered from two secret places on their property that Cathryn won’t divulge!

Other Iron Range features such as the underground iron ore mine in Soudan with its cutting edge physics experiments and a tour of the Museum of Mining in Chisholm, are also on this program. The Northwoods Reader for the week is: “Lost in the Woods” by Cary Griffith.