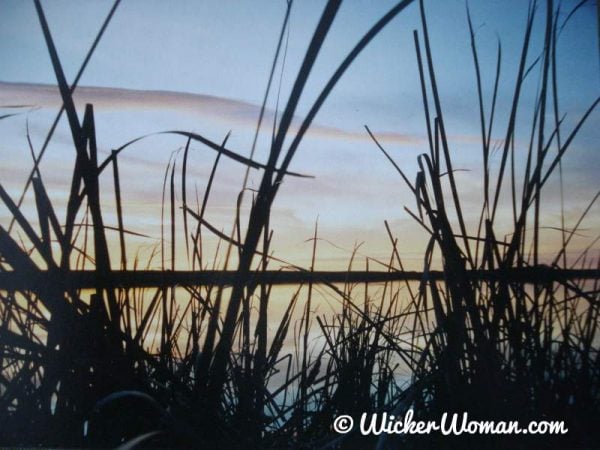 Have you ever wondered about cattail leaves and wanted to learn more about them or how to gather cattail leaves? Well, here’s an article and video that just might answer all your questions. Enjoy!

Cattails are a perennial plant that grows and spreads through a rhizome system like the iris and daylily flowers, the rhubarb plant, and others.

They typically grow in marshes, road ditches, ponds, swampy areas and even in neighboring yards and around fish ponds all across the United States. 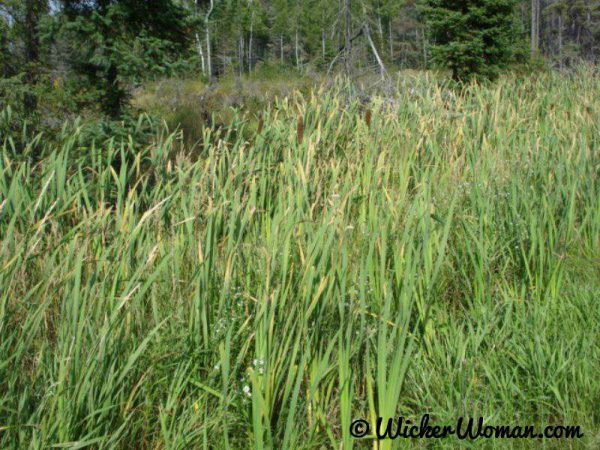 Cattails growing in a pond

Cattails are easy to recognize with their long slender leaves and the puffy brown seed spike or “cattail” at the end of a center stalk.

The leaves of cattails are readily available to harvest locally in most areas, are inexpensive and for the untrained eye, are hard to distinguish from bulrush when used in weaving chair seats.

Bulrush plants, however typically grow in slow-moving rivers, so they are not as accessible as the cattails and are much more difficult to locate and harvest. But for the chair seat weaver, using bulrush excels over the use of cattail leaves because they have round stalks instead of sharp, flat leaves. 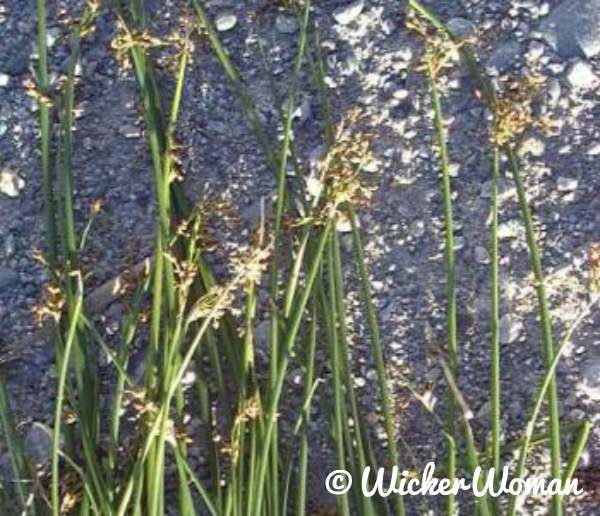 Bulrush has small florets at the tips and the shafts or stalk has no leaves. Bulrush is soft, pithy and round with no sharp edges. They twist together more evenly and takes fewer of them to make the twisted rope-like strands than do cattail leaves.

If you cannot harvest your own supply of either cattail leaves or bulrush, they are seasonally available for purchase from a couple of cane and basket supply companies listed on the Cane & Basket Weaving Supplies page on WickerWoman.com

There are two main and separate parts to the cattail plant; the stalk with its seed-bearing flowering “cattail” at the end of the stalk, and the vegetative part that’s made up of leaves alone.

The brown, fluffy spike at the end of a long center stalk is what’s known as the “cattail” because it looks somewhat similar to the tail of a cat.

When the cattail explodes to scatter its seeds, there is a mass of fluffy white “down” that blows around in the wind. The Native Americans and early settlers used the cattail fluff as stuffing for pillows and sleeping mats, and it was also substituted for goose down in jackets and coats.

Leaves to be used in weaving projects are gathered from the vegetative part that does not have the cattail catkin on it.

The new spring shoots of the cattail plant can also be consumed and are considered a delicacy in some circles.

My preference to use in seat weaving is Typha latifolia L. with its tall stems (3-9 ft.), big, fat, brown spike catkin or “cattail,” and its broad flat leaves of about an inch wide and at least 5-9 ft. high. 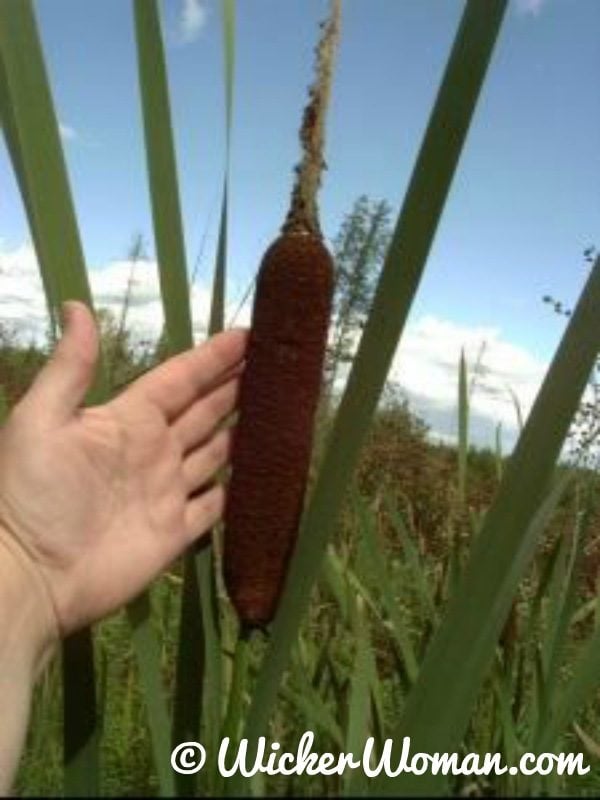 I do however also harvest the leaves of the Typha angustifolia L., (which have smaller more narrow leaves and narrow cattail spike), to use as a filler when I need a slimmer weaving strand. 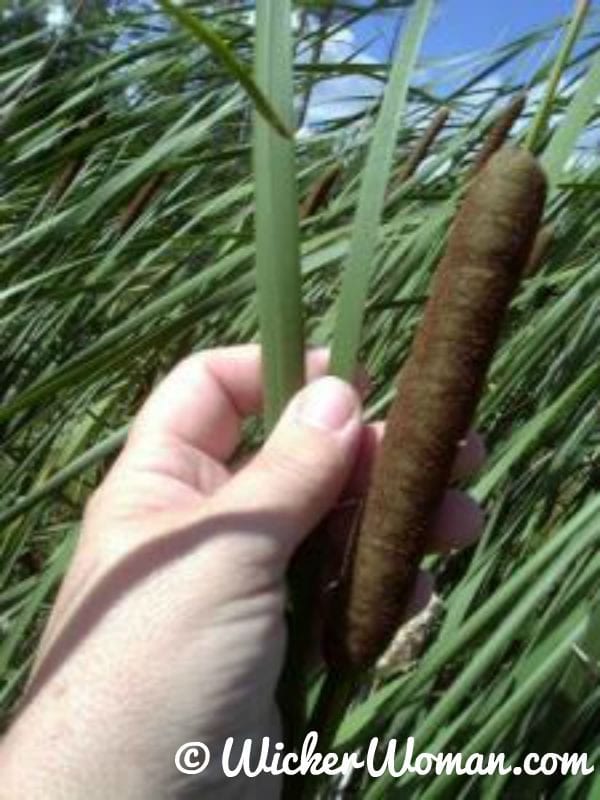 There is a pre-twisted seagrass product (also called reel rush) available from cane & basket suppliers that somewhat resembles a hand-twisted natural cattail or bulrush seat. It is fairly easy for the inexperienced or novice weaver, but pales in comparison to the expertly crafted and woven “real thing,” and should not be used on museum quality furniture or antique pieces if at all possible. 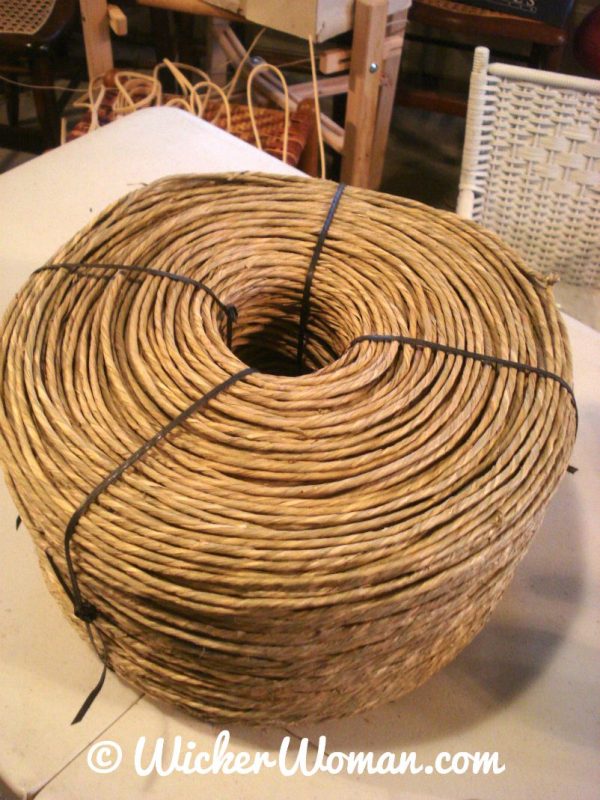 The completed woven rush seat design is made up of four triangles, which look somewhat like the back flaps of envelopes. The points of the envelope meet in the center, forming a very large “X” design. 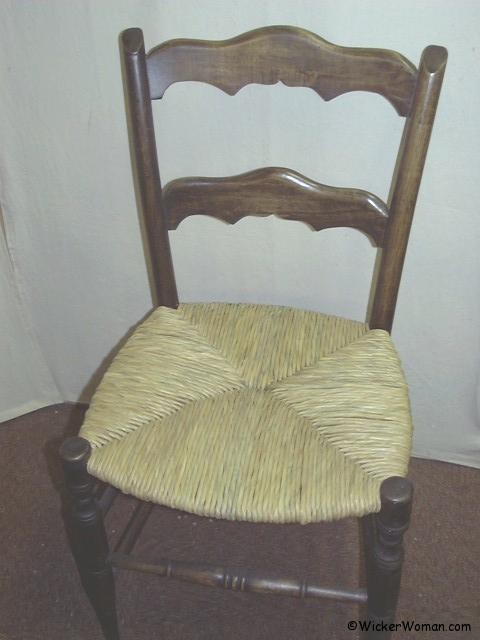 The weaving pattern is started on the outer edges of the seat, then through a series of wraps around all four rungs and through the large center hole, it ends in the center.

Imported English, Portuguese, or Dutch bulrushes are preferred over their American bulrush counterpart for chair seat weaving because they grow taller than ours for the most part.

It’s very desirous to have 6-10 foot long rushes, which makes for fewer joins. Because the imported bulrush is so expensive, and the American bulrush is not quite as tall as we would like or accessible, most American seatweavers substitute cattail leaves for the bulrush.

The stalk of the cattail, which holds the furry spike that contains the flowers and pollen is not used for seatweaving. It is, however, prized by florists that use them in floral arrangements. The leaves of the cattail plant are flat, not pithy (accept at the base) and have sharp, well-defined edges.

Depending on where you live in the country, gathering cattail leaves usually begins in late July, August or early September, just when they have grown to their greatest height and the tips of the leaves have begun to turn brown. Be sure to harvest before the first hard frost though, because the cold temperatures compromise the quality of the leaves.

Since cattails grow in swampy wet areas, wear boots to stay dry and long pants and long-sleeve shirts while gathering to keep from getting scratched during the gathering process. Take along a good, sharp pair of basket scissors (the red or white soft handle basketweaving ones are best), a sharp knife, or small machete and have a place to lay the leaves down flat for transport home.

You want to avoid bending or cracking the leaves because they will break in use if mishandled now. 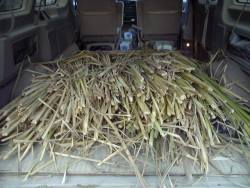 The hauling surface needs to be at least six feet long, but eight foot is preferred. My van has an eight-foot interior box, so that works well for me. Otherwise, if I’m gathering on my home property, I take a king size bed sheet and lay the leaves diagonally in it and wrap well to pull home.

I prefer to select the tallest and widest leaves for my purposes of seatweaving with cattails, but also like the larger ones for weaving baskets, coasters and placemats.

Selecting the longest leaves (not the catkins, the puffy seed pods used in flower arrangements), makes for fewer “joins” during either weaving process. It also takes fewer large leaves to twist together to make a coil, rope, or cordage so the weaving goes faster. Be sure to harvest some of the thinner leaves too, just in case you need to make a more narrow weaving strand.

Cut the leaves at the base or butt end, where they meet the water, then lay them flat for transport home. Keep all the butt ends together and the tip ends together, don’t mix them up or you will have a mess trying to sort them out later. Remember too, that you are gathering only the leaves here, not the stalk with the cattail or catkins (the fluffy brown things).

Now that you’ve gathered all these cattail leaves, be sure to follow on with the processing cattail leaves to complete this part of the project, just click on the link below. Then it’s off to using your haul in weaving rush seats and baskets!

Thanks so much for reading this FREE article on “How-to Gather Cattail Leaves” and for your support of WickerWoman.com! Please stay tuned for more and come back again real soon.

Welcome, my friend, to TWW! I'm Cathryn and I'm excited to share with you all I've learned about chair caning, wicker repair, and basketry over the last 40+ years. Let's weave up some magic together! 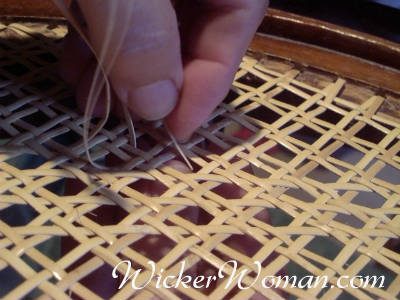 You have Successfully Subscribed!

Don’t worry, we guarantee 100% privacy. Your email address is safe with us!

Many links on this website are affiliate links, which means if you click my link and then purchase an item, I receive a small commission for referring you at no extra cost to you.

WickerWoman.com is a participant in the Amazon Services LLC Associates Program, an affiliate advertising program designed to provide a means for sites to earn advertising fees by advertising and linking to Amazon.com