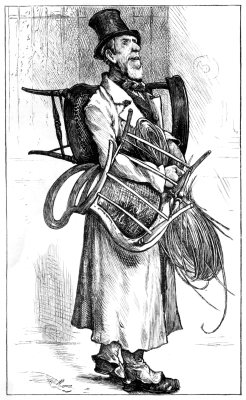 The following nursery rhyme reflects the cries of chair bottomers and chair menders (chair caners and rush weavers), of the 1700-1800s.

These bottomers would carry all the materials needed such as chair cane, bulrush, and splints to repair the bottoms (seats) and backs of damaged chairs.

The art of doing small things well has a good illustration in the humble chair-mender of the London streets, who is also one of the most interesting of outdoor tradesmen.

He carries all his implements and materials with him. A very much worn chair is thrown over one arm as an advertisement of his occupation, and it is needed, for his cry, “Cha–ir–s to men–n–nd,” is uttered in a melancholy and indistinct, though penetrating, tone. Under the other arm he usually has a bundle of cane, split into narrow ribbons.

His look is that of forlorn respectability; his hat is greasy, and mapped with so many veins, caused by crushings, that it might have been used as a chair or, at least, a foot-stool; around his neck he wears a heavy cloth kerchief, and his long coat of by-gone fashion reaches nearly to the ankles, which are covered by shabby gaiters. He walks along at a very gentle pace and scans the windows of the houses for some sign that his services are wanted.

Perhaps business is dull, but in the neighborhoods where there are plenty of children he is pretty sure to find some work. Cane-seated chairs are durable, but they will not stand the rough usage of those little boys and girls who treat them as step-ladders and stamp upon them.

It often happens that a neat English house-maid appears at the area railings with a chair that has a big, ragged hole in the seat, through which Master Tommy has fallen, with his boots on, in an effort to reach the gooseberry jam on the pantry shelf.

Master Tommy probably looks on while the repairs are being made, and is much interested by the dexterity with which the mender does his work. The old and broken canes are cut away, and the new strips are woven into a firm fabric, with little eight-sided openings left in it. The overlapping ends of the ribbons are trimmed with a sharp knife, and the chair-seat is as good as new.

It seems so easy that Tommy thinks he could have done it himself; but when he experiments with a slip of cane that the mender gives him, he finds that chair-mending is really a trade that must be learned.

Some chair-menders are blind men, and it is still more interesting to watch them at their work. The plaiting of the canes is done as unerringly by their unseeing fingers as by the men who can see, and with wonderful quickness.

Occasionally the business is combined with that of basket-making, and should we follow poor old “Chairs-to-Mend” home, we might discover his family busy weaving reeds and willowy branches with the same cleverness the father shows in handling the canes.